It is no secret that dealing with a pregnant or new mom’s hormones can be…challenging.  Not only is it challenging for her partner, but it’s tough on her too.  She’s well aware that at times she’s riding Ozzy’s crazy train, but despite her best efforts, she just can’t seem to get off of it.  And if you’re not careful, that train will surely run you over.

Who knew you could experience extreme joy, frustration, irritability, and happiness all at the same exact time?  Maybe it’s the fact that all she was able to make to eat that day was a peanut butter sandwich, a pack of fruit snacks, and some milk she chugged straight out of the carton.  Maybe it’s because her period finally came back, and she is absolutely certain that this is what will kill her (was it always this bad??).  Maybe her pregnant belly is now preventing her from tying her own shoes, and you found her rolling on the ground trying to find a position that allows her to reach the laces before she dares to ask for help.  Maybe it’s because of that damn “because the day I became yours, you became mine” Carter’s commercial that seems to play on repeat while catching up on her shows.  Maybe it’s because she didn’t sleep all night, as she laid there convinced that every breath you took while peacefully dreaming was a deliberate attempt at annoying her.  Maybe its because she took out the trash, only to realize it’s two days early.  Or maybe it’s because she was grocery shopping and her sneeze made her simultaneously pee herself a little bit in the middle of the store.  (None of this EVER happened to me, just so we’re clear).

Whatever the reason that set her off, she needs you to be the calm during her hormone storm.  Which, as you can imagine, is a very delicate feat.  So, here is your fool-proof, works every time, don’t stray from this chart, guide.

Ladies and gentlemen, you are welcome.  (Chocolate and hugs are also encouraged). 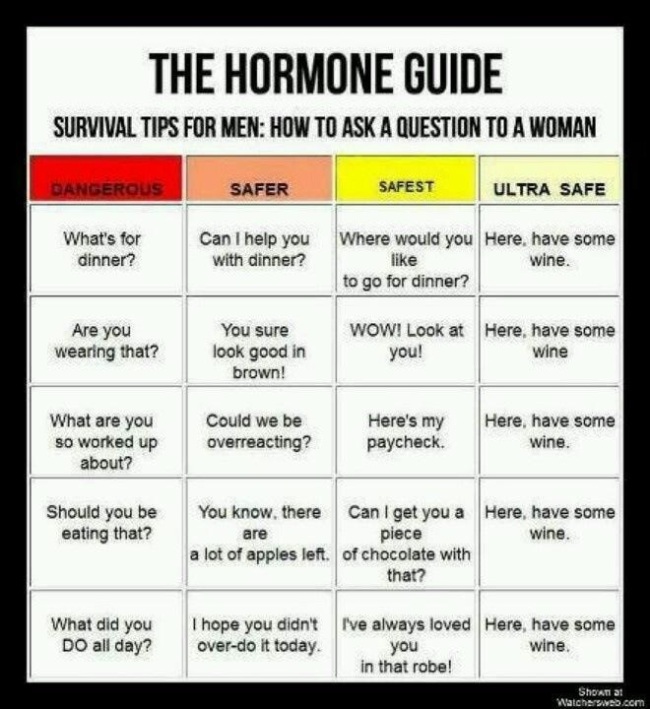 The Girl in the Yoga Pants